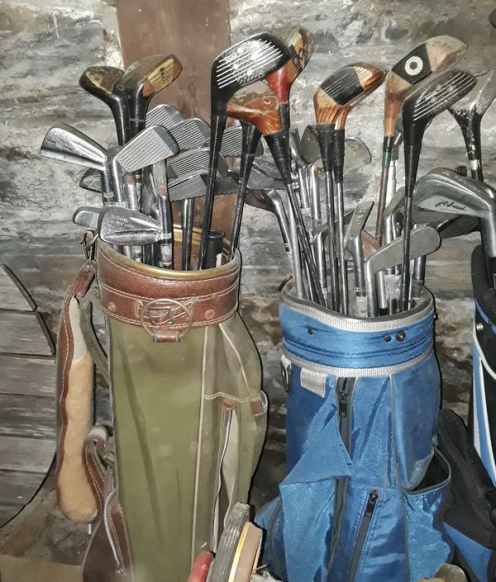 When I met Wayne Biddell, he had two bum knees, although they were the least of his problems. He had been a Cleveland Police Department detective for fifteen years, and a uniformed officer before that. He once told me in all that time he had only drawn his service handgun three times, and never fired it.

He had bad knees from playing handball at the downtown YMCA.

“I probably never should have played that game, but I loved it, although it and my job cost me my legs and my marriage,” he said.

I met Wayne after my marriage fell apart and I lost my house, which was a lot like what happened to Wayne. We met on the grassy courtyard of the apartment complex on East 222nd Street in Euclid, where we both lived, when I saw him messing around with his golf clubs on a warm dry spring day. He was retired and lived alone.

I wasn’t retired, not exactly, but I lived alone, too.

We played golf together for the next three years. He was the best friend I ever had, even more than Mattie Haylor, even though Mattie ended up doing more for me later on. Wayne did many things I never even asked him to do. After I moved to Lakewood, he got me a car, convincing his lady friend to give me the old Ford she had been planning on trading in when she got her new car, and later mailing me a check for five hundred dollars, to live on, knowing I was broke.

It wasn’t his fault the Ford’s transmission blew out and my son-in-law wouldn’t lend me the money to get it repaired.

“Fixing it will cost more than the car is worth,” he said. “You’re better off scrapping it.”

I knew he was right, but I knew he didn’t want to lend me a cent, anyway.

I junked the Ford and got a hundred bucks for it.

I had to walk to the Lakewood Library and McDonald’s, the grocery and the bus stop that winter, the winter Wayne blew his head off, and all the next spring until Mattie died and left me a hundred thousand dollars, after all was said and done and the trust sold his house, and I was able to buy a new car.

When my wife Mary walked out on me, and took all the money out of our joint accounts, and cashed in our insurance policies, and swooped up the kids, and talked me into taking a second mortgage out on our house so she and her boyfriend could open a restaurant, which failed inside of two years, and Chamber Bearings went bankrupt, putting me out of the only work I had ever done since getting shipped home from the Korean War with a Purple Heart, was when I played more golf than I ever had played in my life, and waited to be thrown out of my house.

When I finally moved out of Indian Hills, down the hill to Euclid, I was in my late 50s. I was holding on, waiting to get to 62, so I could get on Social Security early. I needed the money. When I worked for Chamber Bearings, they gave me a new car every year, and I had an expense account no one ever questioned, and was in line to be made a vice-president, up to the day the family business closed their doors without a word of warning to me. There were years when I almost always had a thousand dollars, or more, in cash in my pockets every day.

Those days were gone.

When I moved to Euclid I moved into a free apartment, an apartment that Angelo, the maintenance man at the apartment complex, who I met through Stan, a Polack I often had breakfast with at the railroad car diner on Green Road, not far from the giant Fisher Body and TRW plants, got for me when I got hired to be his helper.

Stan and I talked all the time over cups of coffee. We got to be good friends. He was a hell of a bowler. He was so good he bowled in tournaments, and I went to a couple of them to watch him. It was a hop, skip, and a glide to the line. He was always pounding out strikes.

Angelo was a Korean War veteran, like me. He talked the Jewish guy who was the boss, who owned the apartment complex, into hiring me. Jews run the country. They run the money, which means they run everything else, too. They own most of the gold in the world. They marry inside the family, keeping it all together for themselves.

I shoveled snow, did some of the gardening, and vacuumed the hallways. I cleaned apartments when they went vacant, and got paid extra whenever I had to clean kitchens, scrubbing the stove and emptying out the fridge, throwing away rotten food. I made a few bucks here and there. I kept my head above water.

The apartment complex had been built during World War Two for government workers. It was sturdy like a fort. The brown brick buildings were three stories with garages in the back. Fox Avenue intersected the complex and ran all the way to Babbitt Avenue, where there was a golf course. Wayne and I would shuttle to it on good days, getting in eighteen holes.

Wayne worked part-time at night, in a booth selling betting slips at the Thistledown horseracing track in North Randall. He was on his own during the day, which was how he and I were able to go golfing together whenever I was free. We even went to tournaments, to watch the professionals. Stan went with us once, but he wasn’t used to walking that much, and got tired.

After I lost my car Wayne always drove. He had gotten a new Mercury four-door sedan. He loved that car and talked his lady friend into getting one, too. That was how I got her old Ford.

When I moved to Lakewood, on the west side, to a small apartment across the street from St. Ed’s High School, Wayne visited me a few times, even though he didn’t like my apartment or the building. “It’s a dump,” he said. I took him to Joe’s Diner. I could tell he was suffering. He had prostate cancer and was hurting bad. It was just a matter of time.

I called him on Christmas Eve and wished him happy holidays. He didn’t sound good, but he didn’t sound bad, either. At least, that’s what I thought. I was dead wrong.

Wayne’s son was at Miami University. He had tried out for the football team as a walk-on and made the cut. He was a hell of an athlete and was their back-up quarterback. He drove up to Euclid to see his dad on Christmas. Wayne told him about his new car.

“Take my car and give it a little ride,” he said. “I haven’t driven it for a while. It needs to be out on the road.”

His son got the car and drove it up and down Lakeshore Boulevard. It had snowed overnight, but not much, and what snow there was had been plowed to the side. When he got back, he found his father in bed. Wayne had put a pillow over his head and a gun in his mouth. It was the first and last time he ever shot a gun at a human being.

After the funeral I walked around Lakewood until summer, until Mattie, my golfing buddy for many years, who was in his 80s, got sick. He was taken to Fairview Hospital, and when there wasn’t anything more they could do, he was moved to the Welsh Home in Rocky River.

Mattie was a great guy and great friend of mine, my other best friend for a long time. He was on our golf team in the Cleveland Metropolitan Golf Association. We had about ninety members and most of us were friends. We played golf until it was too wet and cold to walk the courses. After that, any of us who could afford it went on vacations west or south to play. I had traveled to sunny places to play golf many times, when I was married and even afterwards, until I couldn’t afford to go far anymore.

When Mattie passed away in his sleep, a month-or so after his funeral I got a letter from a lawyer saying I was included in his will. He had left me his house. It surprised me, but didn’t surprise me. I was the only person who ever listened to what he had to say, who stuck around when he got quiet, who waited to talk about something else he was bound to remember sooner or later. The house was sold and I got a check for a hundred grand.

I was always a good friend with different people, including Wayne and Mattie, who were my two best friends. It’s good to be best friends with your best friends. I bought a new car, paying cash for it. I paid off all my credit card debt, the credit cards I had been living on, and bought a new laptop computer, so I didn’t always have to go to the library to work on my schemes.

My ship is coming in one day. When it does, I’ll dump the Chevy in the blink of an eye and get an Audi convertible.  I’ll go to Florida every winter.

I bought some new shirts and shoes and ate better. After squirreling the rest of Mattie’s money away I was in good shape. I played golf all summer at some new courses. I went to both Wayne’s and Mattie’s graves once and paid my respects.

I made some new best friends.

Click here to see more writing between fiction and non-fiction by Ed Staskus.